skip to main | skip to sidebar

Representations form natural layered structures, with the representation of one system being the target domain of another, and so, as shown schematically here:

A common family of layers in computational representations connects entities in some target domain with numbers, the numbers with collections of bits, and the bits with physical structures of some kind. Here's an elaborated example of this, starting with sticks, in a target domain at the top: 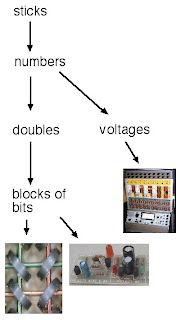 Branching works with layering to create vital flexibility. In my career the actual representation of bits has changed completely, from magnetic cores to nests of tiny transistors, but as a programmer this change affects me only secondarily, through improvements in cost and performance. The investments in software I and many others made were not lost, even as the hardware structures used to represent them changed utterly.

Although this example doesn't show it, there is upward branching as well as downward branching. Upward branching shows up when the same representation domain is used with more than one target domain. Clearly, lots of things can be represented by numbers with addition as a combining operation, for example. Thus upward branching signifies multiple use of representations. Mathematical (and computational) structures get much of their usefulness from the fact that they can be used to represent lots of different things.

Layering and the Organization of Disciplines

Looking at bundles of layered structures one sees a tree with branches (or roots) at top and bottom: 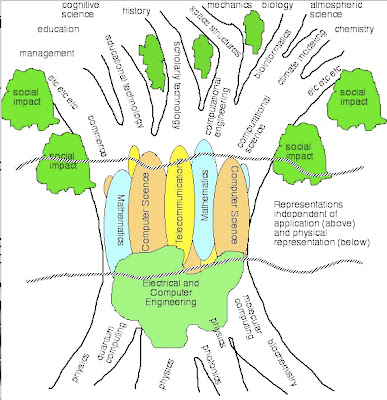 The branches at the top radiate into all the corners of human endeavor, from management to chemistry, and beyond. The roots of the tree extend into the wide variety of physical structures that are used, way down at the bottom of all the layered structures, to implement the representations above them. The traditional discipline of computer science focuses on the structures in the trunk of the tree, largely independent of the branches above, that distinguish different applications, and at the same time largely independent of the roots below, that distinguish various possible technologies of implementation.

Mathematics also inhabits this middle zone, studying structures that are largely independent of their applications, above, and certainly independent of the layers below. Indeed, mathematics is different from computer science, or vice versa, largely in the demand in computer science that its representational structures actually be implemented, that is, that they be grounded, or at least groundable, in physical structures.

The fact that the disciplines can be sorted out in this way, by reference to layered representational systems, does not mean that there are important advantages in doing so. The success of tight collaborations between computer scientists and scientists in other disciplines, like those that have led to the explosion of computational biology, suggests the value of understanding multiple layers at the same time, in devising new and more useful representations. Looking down from traditional computer science, there have also been important gains in blurring the traditional software-hardware boundary, in devising implementations that are sensitive to attributes of programming languages, and vice versa.

Donald Campbell, in his "Ethnocentrism of the disciplines and the fishscale model of omniscience", 1969, showed how very simple organizational processes lead to disciplines withdrawing from boundary areas. Computer science may stand to gain even more than other disciplines from fighting this tendency, and actively developing its boundary areas.
Posted by clayton lewis at 7:58 PM

Note that this "blog" isn't really a blog, it's a sort of rough paper written incrementally. So it is read best in reverse order of presentation, starting with the earliest posts. I apologize!

clayton lewis
professor of computer science and fellow of the institute of cognitive science, university of colorado, boulder